The one thing I told myself I’d never do on this blog is weight loss/fitness posts.  Hell, I don’t even allow ads for those kinds of sites!  So anyway, I’m not going to get into the benefits of one diet over another or anything like that.  You do you.  But right now I’m doing the low carb thing.  It’s horrible, but it also means that I’m probably going to post some low carb recipes.  But don’t worry; it won’t be all low carb!  I get cheat days!

Anyway, last night I knew that I needed to make something of substance so I decided to make a crustless quiche.  Would it have been better with a buttery, flaky crust?  Hell yes.  But it was still pretty damn delicious, guys.

Not only was this delicious, but it was SUPER easy.  So easy that I was on the phone the entire time I was making it.  My best friend (who is a real estate agent) needed to hear about this incredibly pushy real estate agent I had dealt with earlier in the day.  I wasn’t going to put that conversation on hold just for dinner!

This recipe can be easily changed to use whatever fillings you want.  I used spinach, mushrooms, and mild cheddar cheese but if you wanted a broccoli, bacon, and mozzarella that works.  As would bell pepper, Montery Jack, and browned hamburger meat.  Basically, take the egg mixture and pour it over whatever fillings you have!

Preheat your oven to 375° F.  Spray a pie plate with a nonstick cooking spray (I used Baker’s Joy)

Add butter, olive oil, onion, and paprika to a skillet over medium heat. 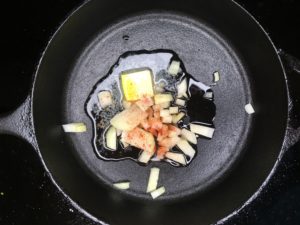 Saute until the onions soften.  Add the mushrooms and stir for two minutes.  Add the spinach and immediately remove from the heat.  Dump everything into your greased pie plate. 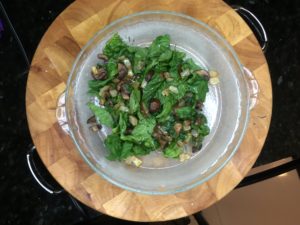 Now sprinkle the cheese on top. 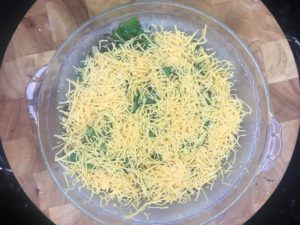 In a mixing bowl whisk together the eggs, broth, cream, and salt.  Pour over the vegetables and cheese. 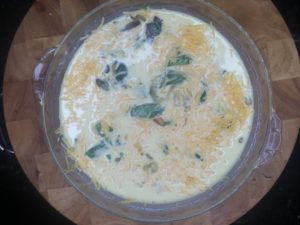 Bake for about 30 minutes, until the center has just begun to set up fully. 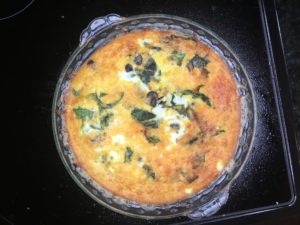 Note the big white blotches where I didn’t fully whisk the egg whites into the yolks. That conversation I was having at the time was engrossing!

I had my first slice of this hot out of the oven with sour cream, chives, and parsley.  But it was even better the next morning for breakfast without any fussy condiments or garnish! 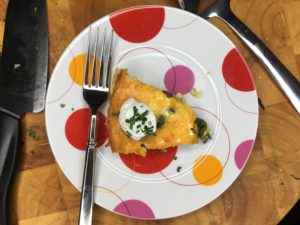 Kitchen tools used for this recipe: 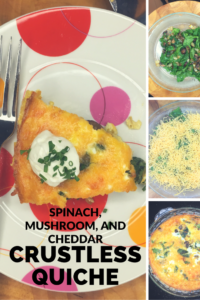