Do you like fruitcake?  Let me rephrase that.  Have you tried fruitcake?  Because it seems that about 99% of fruitcake haters have never taken a single bite of fruitcake.  And don’t get me started on people who hate it when you tell them it’s fruitcake but love it when you call it panettone or stollen.  Phonies!  They’re like people who hate grits because they think all things southern are beneath them, but then love polenta.  I’m on to you, Yankees!

Anyway, if you’re going to bake fruitcake you’re going to need to get started soon.  The reason these things are so incredible is all the time spent drenching the cake with either liquor or fruit juice.  Frankly I’m a little upset that the grocery stores in my area didn’t stock the candied fruit until this weekend.  I’d like to give my cakes three months of rum!  But I’ll have to make do with a month and half.  Honestly, that’s plenty of rum.

I’ve adapted my grandmother’s recipe to suit my taste of the years.  I use more nuts than she does, but that might be the only change.  It’s hard to keep track of what was her change and what was mine.  I think my changes got me closer to the original source recipe that Grandma had cut out of the newspaper back in the fifties.

You’ll probably notice in my pictures that I bake the mini-loafs with these.  Even when you love fruitcake, you want a little nibble at a time.  It’s just too rich otherwise.  That said, I gave one of the mini-loafs to my friend Khaled last year and he ate it at one sitting!  I think culture has a lot to do with that.  Khaled’s Egyptian and he has often remarked to me that desserts in America are nowhere near as sweet as what he’s used to back home.  So I guess if you’re accustomed to that much sugar then you can eat a lot of it at a time.

Plus, these little babies are expensive!  I’m pretty sure each mini-loaf costs $6 to bake (not including the rum I keep pouring over them).

Chop the pecan halves and halve the cherries.  Mix the nuts and fruits in a giant mixing bowl and dredge with 1/4 cup of the flour. 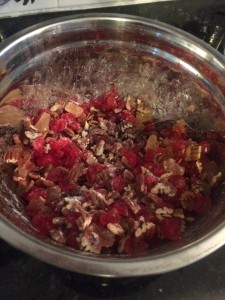 In another bowl, cream together the butter and sugar. 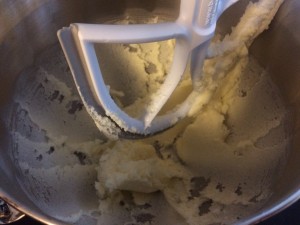 Beat in the eggs. 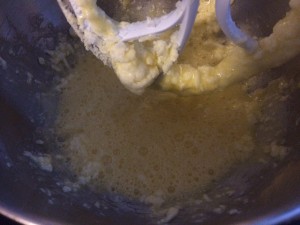 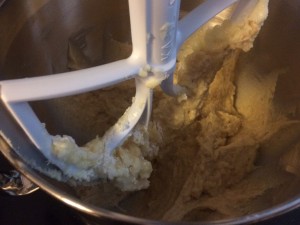 Now mix in the extracts.  Man alive, those seem like overkill.  Don’t they?  But I really think that amount is necessary to compete with the rum that you’ll be soaking these with.

Prepare your pans.  Since I’m giving these as gifts (well, most of these) I use the disposable aluminum ones from the grocery store.  Spoon your batter into the pans and place the pans on a cookie sheet.  This batter doesn’t rise much, so go ahead and fill your pans to the top. 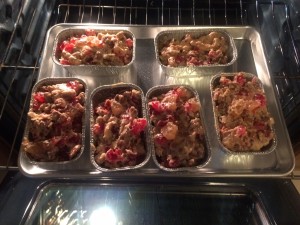 Place the cakes into a cold oven.  Turn the oven to 250F and set your timer for 3 hours.  At the end of those three hours, you may take the cakes out of the oven but you’re not done! 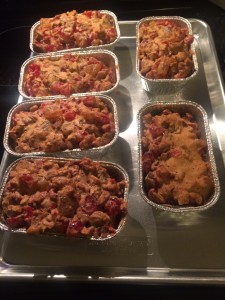 Now for the rum!  Pour an ounce or so over each cake and cover tightly with plastic wrap.  Now for the next month or so you’re oing to unwrap them, pour more rum, and rewrap.  Every night.  That might not be much of a pain in the ass when you have one or two cakes, but with a couple dozen it gets tedious.

If you want a non-alcoholic cake, use apple cider instead of rum.  I always have one tray of cakes that get soaked in cider for the non-drinkers on my list.  And honestly, I think I might like the non-alcoholic cake better than the rum cake!

One thing to note when making these cakes: no matter what other chores you have to do when you get home, bake the cakes first.  These bake for three whole hours so you’ll have plenty of time to get the other work done.  While the batch pictured baked, I put up all my laundry, switched my Halloween decorations out for my Thanksgiving ones, made some cream of spinach soup, 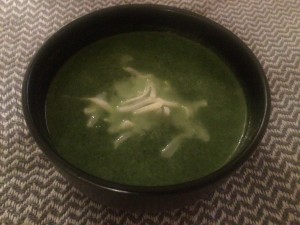 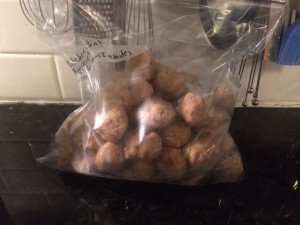 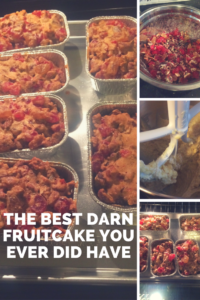