When I started this blog, I definitely didn’t think I’d ever be sharing a “recipe” that included Campbell’s soup.  Or refrigerator biscuit dough.  Hell.  When I’m looking at recipes on Pinterest I automatically disqualify a recipe if it calls for canned soup.  Sometimes you just have to break your own rules.  Like my rule that started out as “no Netflix outside the gym.”  I had to eventually create other exceptions.  Now it’s No Netflix Outside the Gym Unless I’m Sick (excluding things I’ve already seen).  So basically if I’m not sick I can’t watch new shows on Netflix without earning it.

Anyway it has come to my attention lately that nobody I know seems to have had Bags of Gold growing up.  I’d say that this is because I now live much further north than my extended family, but my father’s Yankee mother made this for him growing up too!  She called it Rum Tum Tiddly (sp), but it’s the same thing: just a bowl of hot tomato soup with cheese-filled dumplings.

It’s a definitely rainy-day favorite that I probably only let myself make once a year.  And with the chilly, rainy week we’ve had in Virginia it was time for this!  I have to tell you, I don’t think recipes get any easier than this. 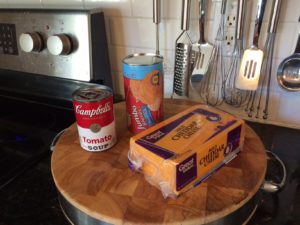 Mix the tomato soup concentrate and milk in a saucepan and heat on low heat.  (I know not everyone uses milk in their tomato soup, but mmmmmm does that make a difference)  While the soup heats, cut the biscuits into fourths.  Then add a cheese cube. 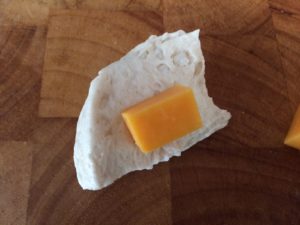 Roll the dough around the cheese. 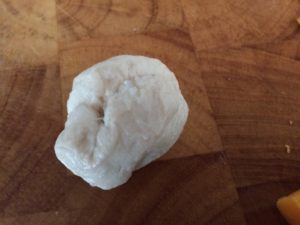 Drop the balls of dough into the soup and let simmer until the dough has risen and cooked through.  Probably about five minutes. 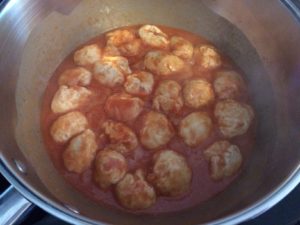 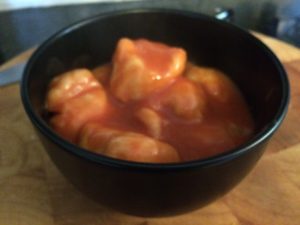 I feel like a good blogger would have put some shredded cheese on top of this. But damnit, I didn’t want any more cheese! 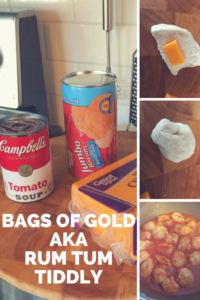 1 Comment on Bags of Gold (AKA Rum Tum Tiddly)