As you may have gathered from the gnocchi soup post, I have quite the love for creamy soups.  And as you might be guessing from the scarcity of posts of late, I’m also a little short on time.  Over the years I’ve tried and tried to find a good slow-cooker cream of potato soup recipe but almost all the recipes I can find call for cream cheese.  And I’ve been really hesitant to try that because serious, that sounds yucky.  Like super-yucky.  But this weekend I decided it was finally time to bite the bullet and come up with a recipe for a creamy soup with cream cheese in it.  I’m still not sure about cream cheese being appropriate for cream of potato, but I thought it might just work for something tomato-based.  Plus, my spinach was starting to bolt out back so I needed to use it up. 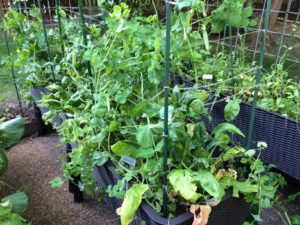 Garden peas and spinach getting out of hand!

Before heading out on a little bee-related road trip with my dad, I assembled some ingredients. 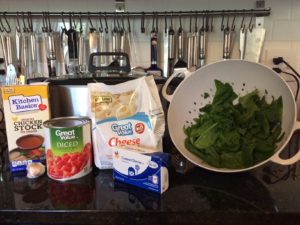 And then got going!

First, I sauteed the clove of garlic in the olive oil.  I didn’t want this to be overly garlicky so I didn’t chop the clove. 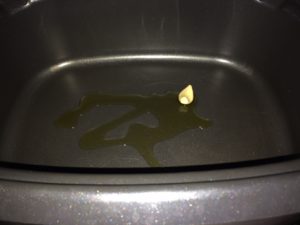 Then I just threw everything but the spinach. 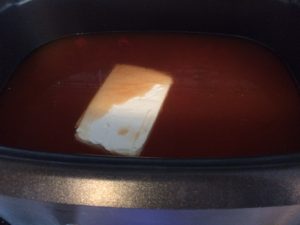 Look how sad that is!  Clearly I needed to chop up the cream cheese.  Beware.  The next picture looks really disgusting. 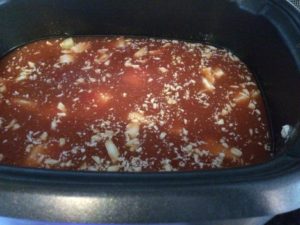 Yikes, right?  Really foul-looking.  Anyway, I threw the spinach on top and cooked on low for four hours. 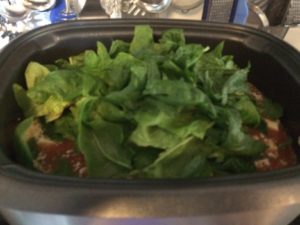 One quick stir, and the soup looked like this! 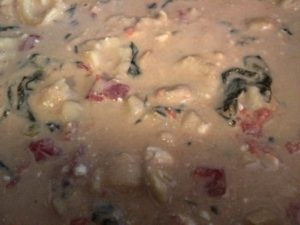 I don’t have any pretty pictures of this in a bowl, because I just didn’t eat a whole bowl of this soup.  In fact, I debated whether to post this recipe at all.  Do you ever eat something and know that it’s good but that you just don’t like it?  That’s kind of what was going on here.  I had one spoonful and thought “I bet meat eaters will like this.”  Now that I know there was chicken stock in it, I guess that makes a little more sense.  Anyway, I froze the soup and figured I’d try thawing it out in the winter to see if I felt differently about it.

But then I had a barbecue on Memorial Day and sent the soup home with my friend/coworker, Bill.  Bill works out a lot (I mean, A LOT) and needs all the foods.  Anyway, I just passed him in the hall and he raved about this soup.  He had friends over who were hungry and didn’t even tell them about the giant container of soup in the fridge because he wanted to hoard it all for himself, so I guess this is a recipe worth sharing! 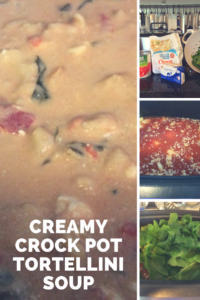