It seems that the image most people have of making tomato sauce is grandmas stirring all day over these giant pots that they can’t even lift.  Not so in my kitchen.  I make tomato sauce a couple times a week from late June through September, and it’s really a pretty hands-off process for most of the cooking.  The key is that I grow mostly indeterminate varieties of tomatoes.  A determinate tomato is a variety that largely produces a lot of tomatoes at the same time but only once during the summer.  You’ll usually get some more tomatoes from the vine after that heavy crop, but not a lot.  An indeterminate variety will produce a handful of tomatoes at a time, but will produce pretty consistently over the months.  Those Nanas who you picture slaving over giant pots, are clearly dealing with a lot of tomatoes all at once!  I don’t have time for that!  I mean, I guess I do have time for that but I don’t want to have time for that!  Why waste a whole Saturday on sauce-making when I can spread it out throughout the summer.  Plus, since I have different tomatoes in each batch of sauce, I end up with sauces with varying flavors.  I’ll mark the jars with “fresh and sweet” or “heavy and earthy” or maybe “rich and spicy.”  I’ve definitely had batches that were marked “I hate it and Dad will love it!”

So the first step of this is to pick your tomatoes and rinse them off.  If you have blossom-end rot or a spot that was eaten by a bug, cut it off!  You don’t have to throw away the whole tomato just because a tiny bit of it was ruined.  Similarly, when I slice tomatoes for other things I stick the unused parts of the tomatoes in a ziplock bag and save them for my next batch of sauce.  In the summertime, that’s never too far away! 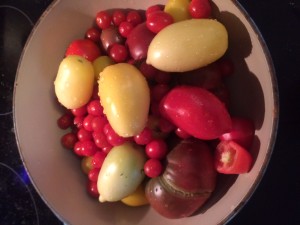 So once those tomatoes are rinsed, I just throw them in a pot.  Most of the time I throw them in whole but (as I stated above) sometimes you have to cut off a bit of blossom-end rot.  So then I put a lid on that pot, set the stove on low, and leave them.  For hours and hours.  If I get home particularly late from work, I’ll just let these cook overnight while I sleep.  Otherwise maybe they’ll cook for two or three hours.  Guys, it doesn’t matter.  You’re just cooking tomatoes! 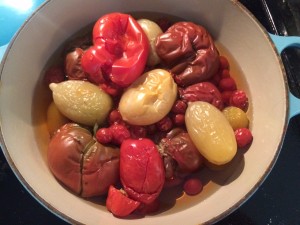 After the tomatoes cook, they are going to look ugly.  I mean, look at these suckers!  Mushy little organs floating in yellowish water?  Yuck.

Next, I saute some diced onion. 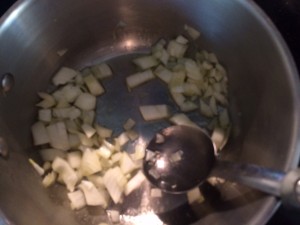 If I’m feeling in the mood for a richer sauce, I’ll throw in a couple tablespoons of tomato paste. 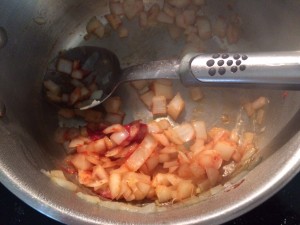 Turn the heat down to low.  Now it’s time to break out one of my favorite kitchen tools: the food mill.  I really like this one because all the parts are dishwasher safe.  Anyway, you just want to run these tomatoes through the mill. 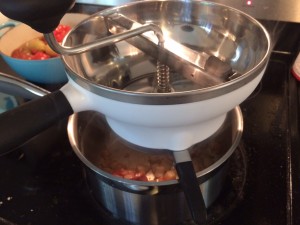 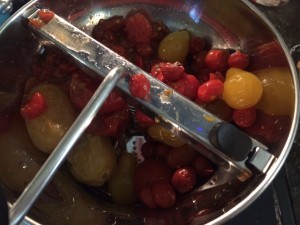 At this point, you have a pot full of thick tomato juice with some onion bits thrown in: not exactly the kind of sauce I’m looking for. 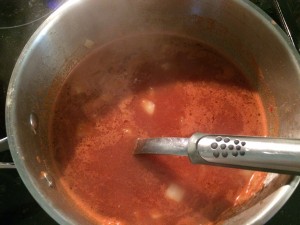 So you’ll just let this cook down on low until it’s at the consistency you like in your sauce.  Depending on the tomato varieties you have in your batch, you may need to add some sugar to tone down the acidity.  I had a bunch of Hawaiian Currant tomatoes in this batch.  Those tiny suckers are so sweet that I didn’t need to add any sugar. I did season with salt as well as some fresh herbs from the garden: oregano, basil, thyme, and a bay leaf. 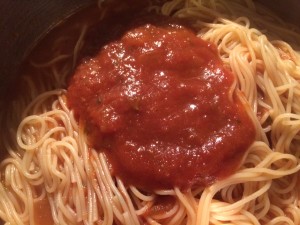