Those of you who really cook should probably stop reading now.  Because what I’m about to post is basic as hell.  I mean, it’s just how to make a big old pot of simple cooked cabbage.  I wouldn’t post it at all, but people are always asking me how I make my cabbage.  Seriously y’all.  I just cook up some cabbage!  I figured it was a decent time to post this though since St. Patrick’s Day is coming up and this Irish girl loves her cabbage!

Update: it turns out I’m not as Irish as I thought!  I’ve always been told that my last name is Irish (and that’s correct).  It turns out that a small number of Germans with my last name immigrated to the States in the late 1800’s and my family was among that number.  The most recent immigrants in my family were still Irish, but my father’s father’s family wasn’t Irish after all! 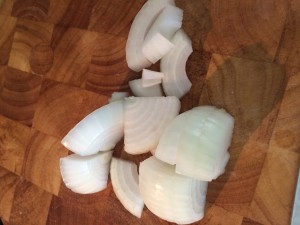 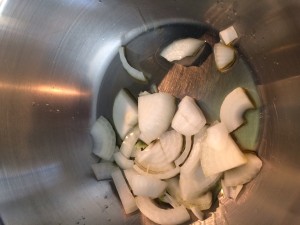 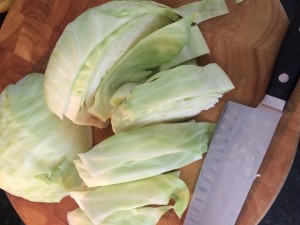 Add it to the pot!  Stir it around!  Season with salt (no pepper because I’m allergic to pepper! But hell, I’m allergic to the onions and the cabbage but I don’t let that stop me.) 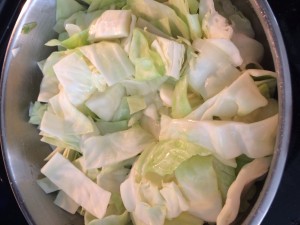 Add about half a cup of water.  Cover, reduce heat, and let simmer 5 to 10 minutes.  Basically until it’s as tender as you like it.  I’m allergic to raw cabbage and onions so I need them both to be pretty thoroughly-cooked.

So I forgot to take pictures of the cabbage after it was already done.  But seriously it just looks like a pot of cooked cabbage.

Oh, and definitely serve this with a slotted spoon.  A certain acquaintance has a tendency to want to eat the liquid in the bottom of the pot.  Resist that urge, guys.  I like to call that “fart water.”