I really need to get going on my holiday baking, as I said in the York Peppermint Brownie post.  Sadly, I’m still way behind.  I spent the past two weekends working on my Christmas decorations, and that was a lot of work.  17 trees are up and decorated so far, so I’m at least happy with that progress!

So given how busy I’ve been, I think you’ll forgive me for another super-lazy “recipe.”  Because again, this is just a description of adding something extra to a brownie recipe.  I will say, these are a particular favorite of my coworkers.  No one can say no to a peanut butter-Oreo brownie!  One of the professors in my department even recognizes when I’ve done the snacks for someone’s proposal or defense because he calls these “Christine’s Special Brownies.”

Anyway, I got home last night much later than usual but wanted to get at least SOMETHING done.  My original plan was to shampoo my carpets while these baked, but instead I watched a Hallmark Christmas movie.  I’m obsessed with made-for-TV Christmas movies and Christmas List did not disappoint.  It had everything I’m looking for: Alicia Witt’s terrible acting making it clear that she has not interacted with human beings in any real way, people who don’t like real Christmas trees for some reason, a handsome bachelor who is way too nice but we just go along with it, and people reacting to our heroine like she’s a much better person than she really is.  Just fantastic.

Preheat your oven to whatever temperature your brownie recipe calls for.  Make your brownie batter however you see fit and spread half of it in a prepared 9″x9″ pan. 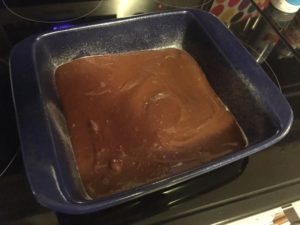 Now spread peanut butter on your Oreos and drop them in the batter. 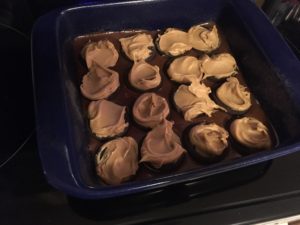 Cover with the rest of the batter and bake the brownies. 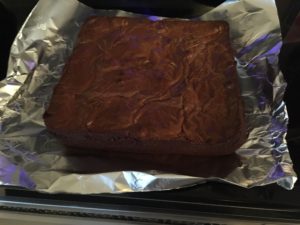 Now, since I’m freezing these for Christmas the next step is just wrapping the brownies in aluminum foil, sticking in a freezer bag, and freezing them.  Not a great picture.  So I went ahead and cut up half of them to take with me to a meeting I have this evening. 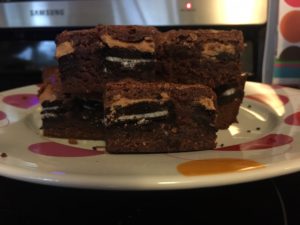 Okay, it’s still not a great picture.  I’m afraid it’s time to replace some bulbs in my kitchen and I was too lazy to go get the step stool.

Also, I’m not sure if I’ve shared my cake carrier.  I love this thing.  It’s sturdy enough to actually carry in a plate of brownies without collapsing and I really like the second zipper.  Because sometimes you want to just reach in and get a brownie but other times you want to be able to neatly remove a slice of cake. 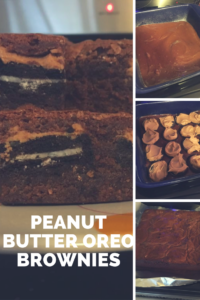 3 Comments on Peanut butter-Oreo Brownies: Look like you worked harder than you did!