I’m straight-up shocked that I haven’t posted a brownie on here.  I mean, brownies are my go-to lazy baking item.  Plus, I don’t particularly like chocolate so I can have brownies in the house without being tempted to binge.  Now, mashed potatoes are another story altogether . . .

I know it’s been a while since I posted anything, and that was by design.  I’m nearing the end of my PhD and I thought doing anything fun would detract from my focus in the lab.  Unfortunately, that definitely didn’t help.  In fact, as soon as I stopped baking and crafting my lab work went to shit.  Just absolute shit.  So I’m back in the kitchen (where we women belong, apparently) and things are going much better at work.  This past weekend was fruitcake time.  I’ve been unreasonably stressed that I couldn’t find candied pineapple at Walmart this fall.  Other grocery stores had it but it was even more expensive than usual and the cost of fruitcake is already so ridiculously high.  Finally I checked the new Wegmans in town and they had it and it was less expensive than Walmart.  So if you have a Wegmans in town, definitely get your candied fruit there!  Anyway, I’d post the recipe but I already did that last year.

Now that the fruitcakes are done, I’m ready to start thinking about baking for my annual Festivus party.  I do the holidays up big, y’all.  Most of my baking at this stage is preparing doughs that can be frozen ahead of time, but brownies freeze really well so I make those early.  That said, while these may have been baked with the intention of freezing I ended up bringing them to work for a meeting.  And forgot to take pictures of the brownies, so there are no beautiful brownie pictures to accompany this post.

Now for the recipe at hand: York Peppermint Brownies.  This “recipe” is barely a recipe.  It’s just a suggestion of something to add to your basic brownies to make them fancy brownies.  Sometimes I Google “brownie recipe” and just make the first recipe for brownie batter that I find.  Sometimes I’ve been proactive and made a batch of homemade brownie mix.  Sometimes I use a store-bought brownie mix, because frankly I don’t think any brownie recipe I’ve ever tried has been any better than the mix.  So if you want to use a mix, use a mix.  I won’t judge you.

This is so damn easy, guys.  Spread half of your brownie batter in a prepared pan. 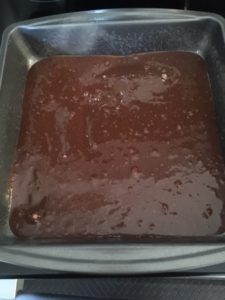 Now line up a bunch of Oreos. 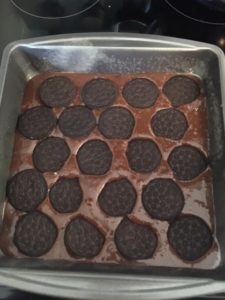 Put some peppermint patties on top of the Oreos. 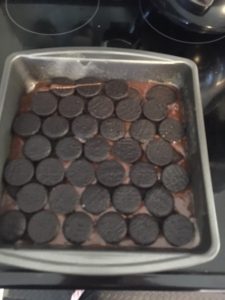 Spread the rest of the batter on top of the patties and then bake your brownies.  That’s it.

This really is super-easy and people act like you’ve invented something magnificent.  If you skip the Oreos in this, the brownies are extra-gooey so if you’re looking for ooey, gooey brownies then skip the Oreos! 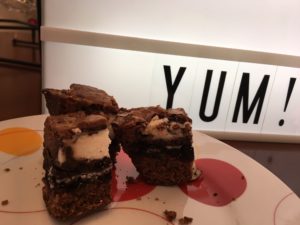 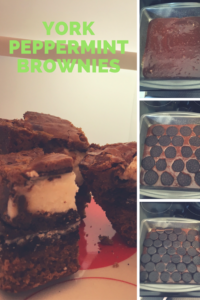