Guys, it didn’t occur to me that when I started posting recipes that meant I was going to have to post my SECRET recipes.  This is painful, but this time of year I basically prepare for Christmas and those preparations involve my secret Christmas recipes.  This weekend I made some apple cider jelly, which I’ve already posted.  To make this year’s batch even better I decided to spice the cider.  I started with honeycrisp apple cider from Trader Joe’s.  This was hands-down the best apple cider I have ever had.  Not too sweet, but definitely sweet.  Just tart enough to have some bite.  Ugh, so good.  Anyway, I bought a package of mulling spices but they were terrible (star anise was overpowering) so I had to throw together my own blend in a mulling ball.  I threw some cinnamon sticks, whole cloves, whole allspice, and a vanilla bean. 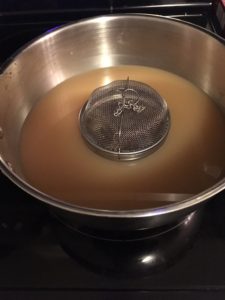 Wow. What a compelling image. I mean, who doesn’t want to see a mulling ball just sitting in some cider?

Anyway, from there I just used my previous recipe.  You’ll see jars of cider in the background throughout the rest of this post, because I made the fudge while waiting for my water bath canner to come to a boil.  I can’t wait until I’m in a position to move and buy a house with a gas stove.  You really wouldn’t believe how long it takes my smooth-top electric range to bring a water bath to a boil.  And I can’t even can large jars using the water bath method because I can’t get a really large pot of water to boil.

Enough complaining about my stupid stove though.  While my jars of cider were sitting in almost-boiling water, I got to work making my Rocky Road Fudge.  I’m way more excited than usual making the Rocky Road Fudge because this is my first year getting to actually eat this fudge.  I’m a vegetarian, so the marshmallows posed a problem but now Trader Joe’s sells marshmallows and they’re vegan!  This is exciting not just because now vegan marshmallows are easy to find, but because Trader Joe’s isn’t advertising their vegan status.  So they don’t carry that hefty vegan surcharge.

So on to the recipe.  I know I got this recipe somewhere about fifteen years ago, but at this point it’s just a scribbled note in my Christmas binder.  I tried finding it online so I could credit the original, but none of the Rocky Road Fudge recipes I found were exactly the same.  I also know that I changed the original recipe by increasing the amount of butterscotch chips, so that makes this a little bit less plagiarized, right?  I really feel weird not linking the original. 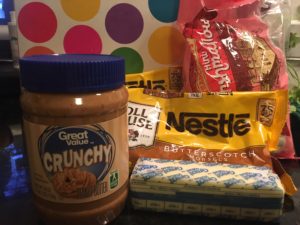 First, prepare an 8″x8″ pan with waxed paper.  I realized quickly that I was out of waxed paper and had to use aluminum foil. 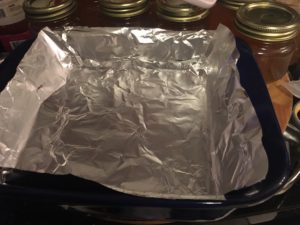 See, I knew those apple cider jelly jars were going to show up some time.

Next, melt together the chips, butter, and peanut butter over medium-low heat.  Once melted, stir in the marshmallows.  I like to stir the marshmallows over the heat for a minute or so to let them partially melt into the fudge mixture. 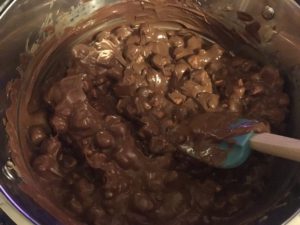 Spread into your prepared pan and let cool. 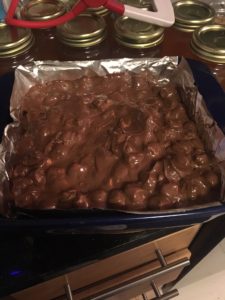 Once your fudge is solid, you’re done. 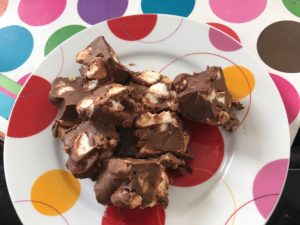 I like to wrap the entire block in aluminum foil and then store in a freezer bag until I’m ready for it.  I haven’t done that yet because I’m defrosting my baking/Christmas freezer. I thought taking it out to the front porch would work quickly because it was 68F yesterday, but I woke up this morning to find it still frozen.  I dragged it to where it won’t get rained on today, but I feel bad that it’s so visible on my front porch. 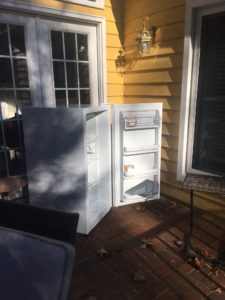 My neighbors put up with a lot. 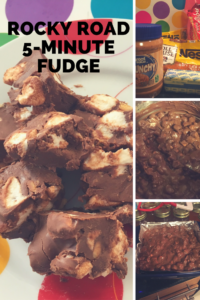