As I posted last week, I recently had my first honey harvest.  I spent a couple hours each night of the week bottling the honey, so by the weekend that part of the project was done.  But I still had the crushed beeswax to deal with.  I’m sure a lot of people just throw that out, but I can’t let anything go to waste.  Especially after the poor bees spent so much energy making the wax!  It takes bees six times as much energy to make wax as it does to make the same amount of honey, so that stuff is precious!  Plus, rendering beeswax sounded like a decent way to spend an evening.

So anyway, here’s the crushed wax/honey/gunk I started with. 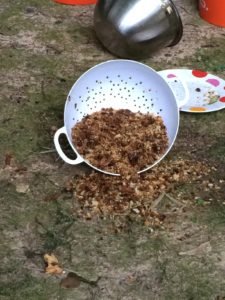 I spread some cheesecloth out and scooped the gunk onto the beeswax. 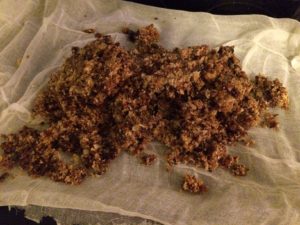 And tied the cheesecloth up into a bundle.  It’s weird how the brain works, but as I look at these pictures all I can think about is the episode of Elementary that was on tv while I was doing this.  I live alone, so there’s almost always something on in the background while I do this stuff. 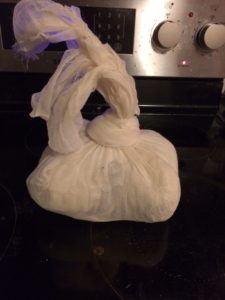 Returning to the subject at hand . . .  Next, I filled a large pot with water and submerged my cheesecloth bundle in the water. 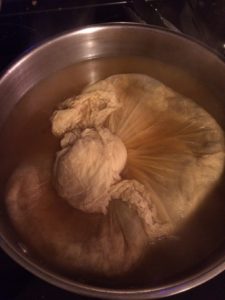 Then I just brought the water to a boil and waited for the wax to melt.  Everything water-soluble ended up in the water (mostly residual honey, I’m sure).  The wax melted out of the cheesecloth leaving some solid “crud” behind inside the cheesecloth bundle.  I squeezed the bundle with tongs before removing it from the boiling water because I didn’t want to leave any wax behind.  After a few hours of cooling, I had this nice round of beeswax. 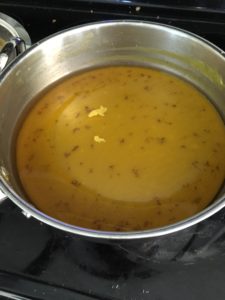 As you can see, there’s still some impurities left in this round of beeswax.  If I thought I’d be making something like a candle out of this wax, I probably would have left the impurities in.  But I’m leaning towards making lip balm, so I went ahead and did the whole thing again, but this time I used two layers of cheesecloth. 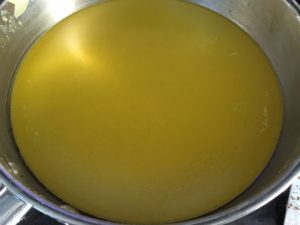 Clearly you’re dying to know what I was watching/listening to during the second round of purification.  It was Practical Magic.  Any time is the right time for a romcom featuring witchcraft.  And Stockard Freaking Channing.  I’m going to need a sequel. 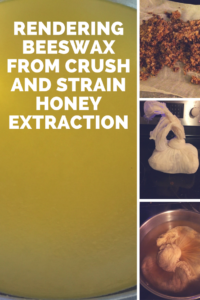 Garden Progress Report
5-minute ribbon and wrapping wreath
The Queen is Dead! Long Live the Queen! How to requeen a hive
Tagged as: bees!, reduce-reuse-recycle