Hey, y’all.  So I feel like I’m still not getting the whole Crock Pot/Slow Cooker thing the way others do.  It seems like an awesome thing to come home and find dinner waiting for you, but I definitely don’t feel like going to the kitchen in the morning.  I’m an out-the-door-in-sixty-seconds kind of girl.  I jump out of bed, brush my teeth, and throw on gym clothes.  It’s just how my day works best.  But I’m also letting this giant slow cooker take up space in my cabinets, so I need to be using it.  Sure, when I get further into the year and there’s lots of fruit butters to make then I’ll be using it like crazy.  But until recently it’s gotten very little use.

Lately though I’ve finally started to understand how to use it.  I’m not the weekday slow-cooker type of person.  I’m a weekend slow-cooker person!  I swear it really didn’t occur to me to use the slow cooker on weekends because weekends are when you’re supposed to have time to cook for real, right?  But my weekend to-do lists just keep getting longer and longer, so it’s great to have something cooking in the background while I get the real work done.  And that’s just what I did here.  While I was outside in the garden, I harvested this beautiful squash. 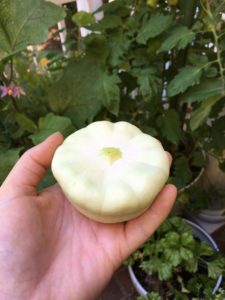 Isn’t that just too pretty to eat?  I mean, I’m going to eat it.  But I’m probably going to look at it for a few days first.

Back to the casserole: I’ll be honest here: I did not have high hopes for this dish.  I happen to hate corn tortillas, but I had them in the kitchen already.  My brother’s girlfriend has Celiac disease so I had bought them the last time she was in town but then we didn’t end up eating them.  So they needed to be used up.  But the whole time this was cooking I kept thinking “ugh.  I’m going to have to eat that.”  But guys, it turned out so delicious!  Probably the best thing I’ve made in the slow-cooker so far.  (Do I always say that?)

I also highly recommend you add the salsa in where I’m telling you to do it.  I’ve made a different crock pot breakfast casserole that had you put the salsa in the same layer as the eggs.  It looked like vomit, guys.  Absolutely like vomit.

Spray your slow cooker with Pam.  Cover the bottom with tortillas, tearing if necessary. 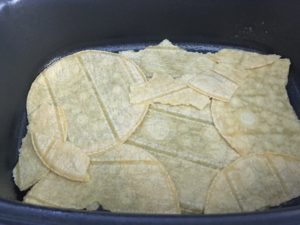 Add half the onion, squash, and salsa. 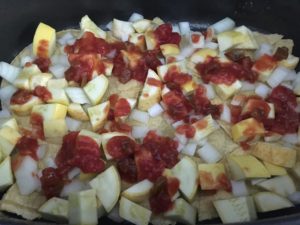 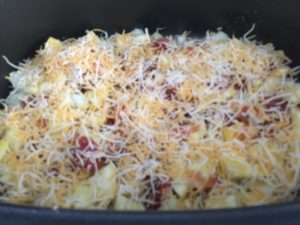 Repeat the layers again, ending with a third layer of tortilla shells.  Beat the eggs and pour over the top.  Sprinkle remaining cheese.

Cook on low power for 4 hours.  The egg should have set up in that time and you get this pretty, bubbly result. 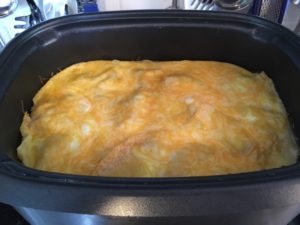 I served this with sour cream, because that’s delicious.  But you do you, man. 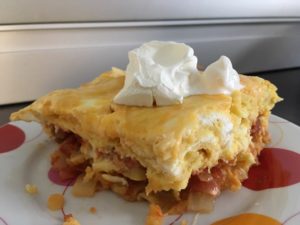 This slice was taken while the dish was piping hot.  The leftovers set up wonderfully and sliced much more cleanly. 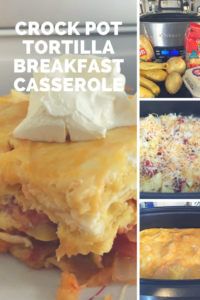 Edited to add: This egg casserole made for an entire week of excellent lunches.