Fruit butters are super-easy to make.  You just puree some fruit, cook it with sugar until it’s the right consistency, and then can it.  Simple, inexpensive gifts.  Right?  Well somehow I made a batch of apple butter that tasted great but looked really bad after I canned it.  Light beige mud.  Not appetizing at all.  Not giftable.  FAILURE!!!  (But hey, still a delicious failure.  Why are you judging me, reader?)

My first attempt was this recipe from Southern Living.  I’ve made some amazing Southern Living recipes, but I’ve also found some real losers.  And this was a loser.  I think the baking time must have been a typo.  And even after putting it back in for more time, it was just too loose a filling to stick together.  So I changed just a couple things and it turned out oh-so-good.  Like pumpkin pie with just a hint of apple.

And this is also ridiculously easy.  I made this pie three days in a row and always while I had other things going in the kitchen.  And since you have to let this pie cool for a while, this is a great thing to bring to a pot luck.  Or just to bake the night before a party.

Preheat oven to 350 F.  Combine the first six ingredients and pour into the pie crust. 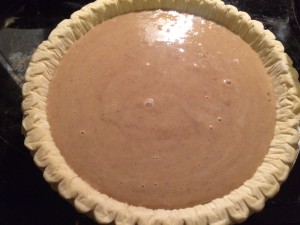 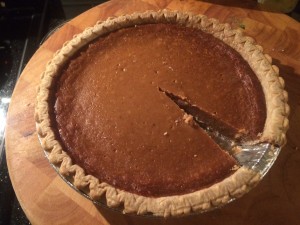 Just like with pumpkin pie, you’re going to want to let this cool before eating.  Hot custard pies are icky! 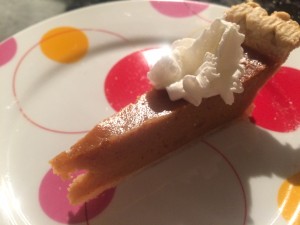 Yes, I know. This is one tiny sliver of pie. But do you think I’m cooking all these things and eating large portions of them? I’d explode!

But then they’re so delicious! 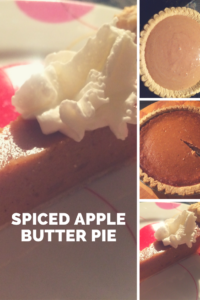