So we’re at the point of the year where I’ve made so many batches of tomato sauce that I’m actively searching for other things to do with all my tomatoes!  I could keep making sauce, but I’m kind of bored with that right now (I type as I’m sitting here thinking I’ll make a batch of sauce tonight).

Anyway, I was pretty sure I remembered seeing tomato jam in my Little House Cookbook as a kid.  I don’t know if any of you had that cookbook, but it was my very first one.  I had devoured all of the Little House books by the end of the first grade and my Nana bought me the Little House cookbook for Christmas.  I was immediately in love.  I’d never done any from-scratch cooking at that point, so I was amazed that such boring ingredients combined to make delicious food.  Remember, you’re about 6 or 7 in the first grade so it’s not like I knew that flour was a major component of cake.  And not to out my mother as a cake mix user, but I thought cake was always the result of a cake mix.  I spent the next few years working my way through the recipes, pretty much concentrating on baking.  I made the blackberry pie after an afternoon of berry picking in the field out back.  And I even entered the apple pie into a kids’ baking contest.  (I didn’t win.  Apparently people don’t believe that a 9-year-old can make a pie by herself.  The winning entrant crumbled up Oreos, added gummy worms, and called it Dirt Cake – not that I was so bitter that I remember this 25 years later . . . )

But as much as I loved those recipes, 7-year-old me had no interest in tomato jam.  Now that I’m kind of an adult, I figured it was time to give it a try!  The night I went to make this jam, I was definitely too lazy to go through boxes at my parents’ house to find my Little House Cookbook, but a quick Google turned up this post with the recipe.  I made one adjustment, adding the basil, but otherwise it’s the same as on the healthy-delicous blog.  Now that I’m typing this up, I took a look at that blog and it has some great-looking recipes.  You should also go there!

I haven’t tried this jam yet.  It is supposed to taste better if you let it sit for a couple weeks, but I’m getting impatient!  I want to try it on a gooey grilled cheese.  Or maybe as part of a cheese plate at my next barbecue.  Or little dollops of it on top of cream-cheese-spread crackers.  Okay, I’m making myself hungry!

First, you need to puree the tomatoes (skin-on) in a blender or food processor.  Transfer to a saucepan. 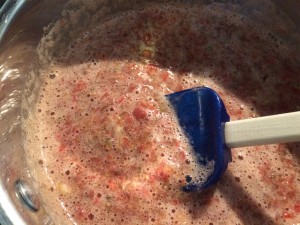 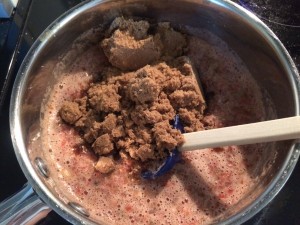 Bring to a boil.  Reduce the heat to a simmer.  You’re going to let this mixture simmer until it’s jam.  This takes about an hour.  Near the end of the hour, stir in the basil. 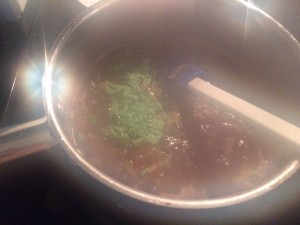 What a terrible picture! Or is a great picture? Does this pot of jam look angelic? Is it magic jam?

Once the jam was done, I spooned it into some sterilized jars.  I used tiny little jars because I like to make gifts of jam samplers at Christmas time.  I could see tomato jam, pepper jelly, and candied jalapenos making a nice trio.  Once the jars were full (just five tiny jars out of 2 pounds of tomatoes!), I canned in a pressure cooker for ten minutes at 5 pounds pressure. 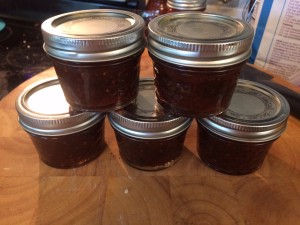 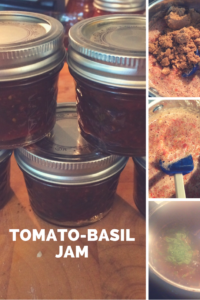