As I was browsing the salad dressing aisle yesterday, I kept trying to think about what I’d do with Thousand Island.  People are eating it, but it’s never really made it into my kitchen rotations.  I’ve never liked it on a salad, but that hit of sweet and salty seemed just right for a sandwich.  And as we’ve seen elsewhere (and here and here), I have a soft spot for a grilled cheese.  I had half a small onion to use up too.  And this was the tale of the birth of a sandwich masterpiece: the caramelized onion, Crimini, and thousand island grilled cheese!

Dice the onion and throw it into a pan with olive oil. Heat on medium-high heat until the onion begins to brown and then lower the heat to low.  This is a great time to empty the dishwasher! 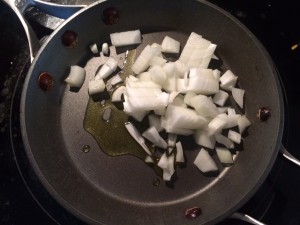 Add the mushrooms.  Now you have time to go sort some laundry and start a load of gym pants! 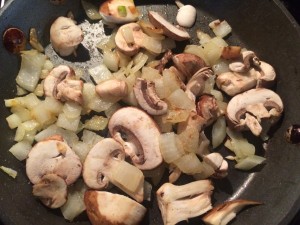 Once the onions have caramelized, go ahead and make your sandwich.  Because I didn’t want the dressing to get too warm, I didn’t make the sandwich completely and then throw it in the pan as I would any other grilled cheese.  First I put a slice of bread in the pan.  Then I built the sandwich in the following order: cheese slice, mushroom and onion mixture, cheese slice.  While I waited for both slices of cheese to melt, I spread the dressing on the other slice of bread.  Once all the cheese was melted, I placed the Thousand Island bread on top of the sandwich, flipped the whole thing, and waited until the second slice of bread was toasted. 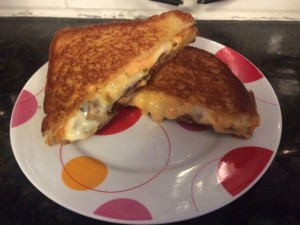 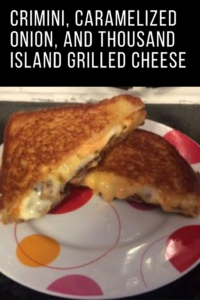 Updated to add: since this post I have made this sandwich many times.  First, it is always the right decision.  This sandwich is just so damn good.  Second, I’ve stopped worrying about heating the Thousand Island.  So if you want to put the sandwich together completely before grilling it, that’s fine!