You may have noticed that I haven’t posted in a while.  It turns out that tonsilitis makes you want to not do anything!  I’ve certainly had to keep up with the garden and housework, but I haven’t been doing anything terribly interesting.

Anyway, I had a bunch of Japanese eggplant that I really needed to cook up on Saturday night, but I was exhausted.  That day my beekeeping club had hosted its annual Honeybee Festival.  It’s a good time, but maybe when you have a sinus infection and tonsillitis you shouldn’t volunteer to talk nonstop for five hours (plus the extra half hour that you do just because).  If that wasn’t bad enough, one minute after the festival closed the sky opened up and poured.  The whole club was outside trying to load cars and take down tents and we were just all soaked to the bone.

So that’s why I was too tired to stand at the stove cooking on Saturday.  I’ve been wanting to see if I could make chips out of eggplant so it seemed like a good time to try.  These definitely turned out very crispy.  I would recommend salting them after cooking instead of before, because my first batch was so salty that they were inedible.  I also liked the thicker-cut chips for this.  They took about twice as long to cook but they had a lot more eggplant flavor.

This probably won’t be one of my favorite eggplant recipes.  But I’m also just not much of a chip person.  I could definitely see these as a great way to sneak some vegetables into your kids if they aren’t big veggie eaters.  And it’s definitely a good way to use up eggplant if you simply have too many sitting around.

Preheat your oven to 250 F.  Prepare some baking trays with parchment paper.  Don’t skip the parchment.

First, you want to thinly slice your eggplant.  You can definitely do this by hand, but that’s a lot of raw eggplant contact for me since I’m allergic to the things.  If I had to slice them that long I’d have had bright red hands.  So I used my food processor. 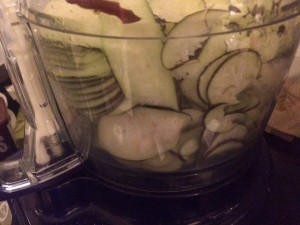 Place the eggplant slices in a single layer on your parchment paper. 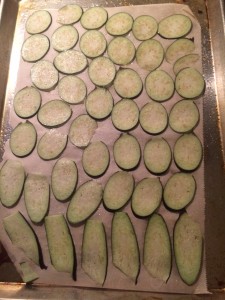 Spray with the cooking spray.  Again, I wanted the eggplant flavor to shine so I used grapeseed oil. 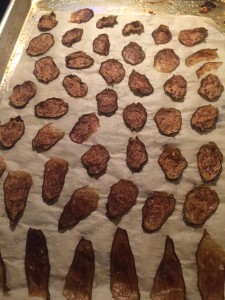 And then get to gnoshing! 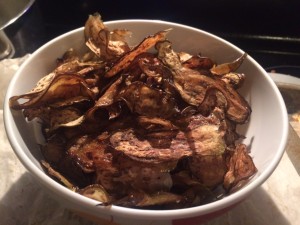 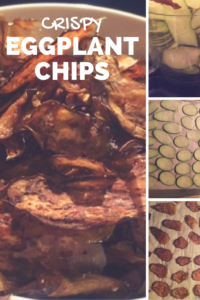