I’d love to say that all winter I was in the mood for fresh salads and fruit.  And I was totally full from those foods.  But y’all, it cold.  With lows in the single digits and now a bit of a blizzard going on, I needed some comfort food.  Looking around the kitchen at what I could make without going to the grocery store, I decided today was a good time for gnocchi!  Store-bought gnocchi is so disappointing, isn’t it?  It’s like salty gum.  The frozen kind is maybe a little better than the stuff from the pasta aisle, but it’s still so very dense.  I like my gnocchi like soft little pillows.

My mom is always telling me she doesn’t “get” gnocchi.  This is one of her more annoying tendencies.  She can never say that she doesn’t like a food.  Instead she has to tell me she doesn’t understand it.  And if she just left it there, I’d say “okay, mom uses ‘doesn’t get’ to mean ‘doesn’t like.'” But no.  She just keeps talking.  In this instance it’s “I don’t get gnocchi.  I mean, what is it supposed to be?  I can never find the potatoes.”  After years of this, I finally figured out the problem: gnocchi are not pierogi.  All this time she thought that the potatoes were somehow supposed to be inside gnocchi, like a ravioli filling.  So now that I have corrected that little misunderstanding, she now just thinks they are the worst thing ever made.  Of course, she hasn’t tried mine!

Anyway, most recipes for gnocchi start with boiling the potatoes like you do for mashed potatoes.  I’ve never quite understood why we make mashed potatoes that way.  I mean, there’s peeling.  And then waiting for the water to boil.  Okay, maybe that’s not a lot of steps but sometimes I just don’t have time for that!  So if I need mashed potatoes in a hurry, I just mash some microwaved potatoes.  And that’s what I did for these gnocchi. 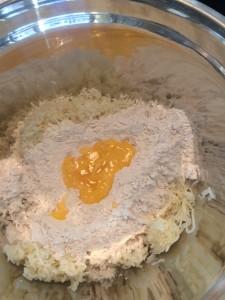 Mash those potatoes however you like!  I microwaved them and then put them through a potato ricer, but the regular potato mashing protocol will certainly work just as well.  Let the potatoes come to room temperature.  Meanwhile, bring a large pot of salted water to a boil  Once the potatoes have cooled add the other ingredients and blend with as few strokes as possible.  Just blend to combine.  Next, knead until you have a thick paste.  Make long rods of dough. 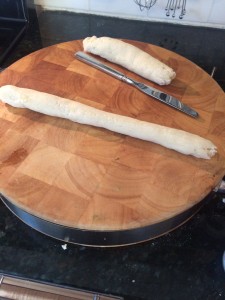 Cut the dough into thumb-sized pieces. 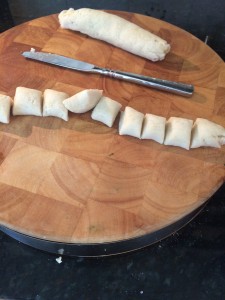 I cut my gnocchi a little bigger than I liked this time. There wasn’t enough surface area for the sauce!

Add several of the gnocchi to the boiling water and cook until they float to the top (about a minute). 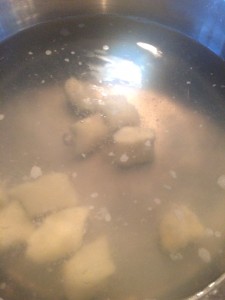 Doesn’t this picture just look disgusting? Yes, but the gnocchi will be delicious anyway!

Scoop the cooked gnocchi out of the pot and place in a bowl of ice water so that they won’t keep cooking.  Continue until all the gnocchi have been cooked.  Drain in a colander and then serve with whatever sauce you’re in the mood for!

Today I went with a tomato cream sauce with some shredded parmesan on top.  Yum! 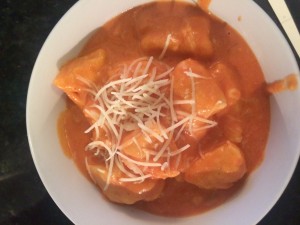 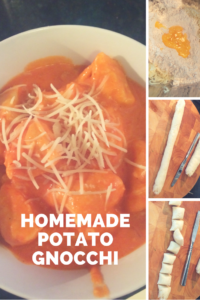