My mom came out of the local farm stand with an eggplant just for me!  Okay, maybe I wasn’t that excited at the time.  I was crazy tired and just wanted to go home and sleep.  But I needed dinner anyway so I figured I’d do something with the eggplant.  In the past I’ve made an eggplant carbonara that was pretty damned delicious.  But it was also so much heavier than I ever seem to want.  So I’ve taken to making a creamy eggplant dish that has a lot of the flavor of the carbonara without that “would I feel better if I made myself throw up?” feeling that I get after more than two bites of carbonara.

So the first step for me is cubing the eggplant.  Then I spread it on a jelly roll pan.  Drizzle olive oil, sprinkle with salt, and bake at 400 F for 10 minutes.  Just until the cubes are softened up.  You could certainly cook the eggplant on the stove with the onions (in the next step), but I find that the eggplant absorbs less oil if you roast it this way. 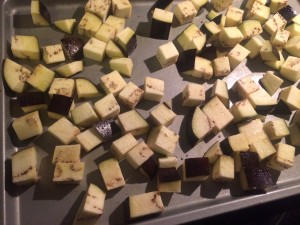 While the eggplant is roasting, I chopped up a small onion and began to brown the onion in one tablespoon of butter.  I did this on medium-low heat (I think it was a 2 on my stove’s dial) because I knew one tablespoon wasn’t a lot of butter for this and I didn’t want anything to burn.  When the eggplant came out of the oven, I added it to the onion.  Next, I poured in 1/3 cup half and half and let the mixture simmer for about five minutes. 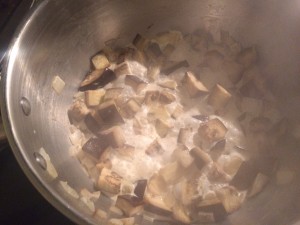 Then I stirred in some cooked pasta.  I know this picture isn’t exactly beautiful, but damn if it wasn’t delicious! 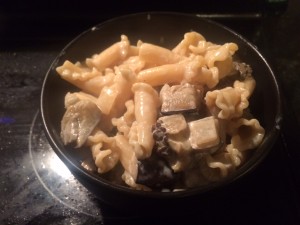