I’m not exactly writing a product review blog here, but every once in a while I have to rave about a product.  Because it’s just that good.

I’ve had terrible cystic acne for over twenty years.  Name a prescription or over-the-counter remedy and I’ve probably tried it.  Retin-A, Renova, Differin, Accutane, etc.  All of these left me worse off than I started.  So after twenty years of having a face that just physically hurt all the time, I started paying more attention to when my skin was better and when it was worse.  Stress of course was terrible.  I can have perfect skin in the morning but two hours into a stressful day I’ll have a cyst the size of a golf ball on my chin!  Being “good” about taking care of my skin always seemed to make my skin worse than when I’d just forgot my skincare for a few days.  But I managed to convince myself that that was just a coincidence.  But the thing that seemed to strike me the most was that I broke out all over my face every time it snowed.  Every. Damn. Time.

After really paying attention to what was wrong with my face during the winter, I realized that I was letting my face get chapped in the cold air.  And it was so painful that one day I caved to the pain and bought a heavy night cream.  My dermatologist had made it so clear that I shouldn’t be using heavy creams with my acne!  But not only did it keep the peeling at bay, but my face felt good for the first time in my adult life.  (In case you’re dying to know what the cream was, it was Aveeno Naturals Ultra-calming Night Cream, which is discontinued for some terrible reason).

So anyway, I was pretty content using the Aveeno cream.  I still had cysts, but they were less painful.  And then I saw some MSN article about Kate Hudson’s beauty secrets.  She swore by something called Egyptian Magic so I looked up reviews for it.  Most of those reviews were glowing but several mentioned an organic cream which was actually cheaper, Sweet Bee Magic.

Now it turns out that Kate Hudson was actually just using the Egyptian Magic on her eyelids, but I seem to have skimmed over that part of the article.  And I’m so glad I did!  I slathered this thick, greasy balm all over my screaming-red face and by morning it felt like real skin again.  I was still stinging and peeling some so I needed to use the balm for a few days.  And slowly I realized that I didn’t have cysts anymore.  I didn’t even get a snowstorm cyst!  During that healing period I used this morning and night.  If you’re already peeling and in pain, definitely do that.  But know that it’s so damn greasy that makeup will not stick to your face.  So now I only use it at night.

So I guess I’m saying that I highly recommend Sweet Bee Magic.  I feel like someone is going to use it and hate it and then hate me forever.  Yikes.  So I feel the need to make this very clear: the ingredients in Sweet Bee Magic are definitely on the naughty list for acne sufferers.  It’s just oil and wax, man.  But somehow it doesn’t break me out.  In fact, the reason I thought to post this today is that I ran out of the stuff this weekend and now I’m broken out.  And it hurts, damn it!

Oh, and sweet Lord do not read the bunkum written on the manufacturer’s website.  It’s the worst kind of pseudoscience quackery.  I hate that I buy their product, but it’s so damned good! 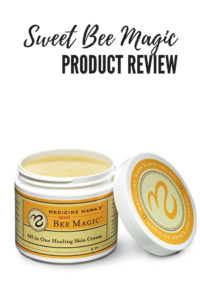 I'm back. With Christmas pictures posted on the first of May.
My favorite gifts for bakers; It's never too early to start planning for Christmas!
This cheesy French onion soup casserole belongs on your dinner table this Fall.
Tagged as: recommendations, skincare, stuff i like