It’s still cold as hell out, which means the comfort food is going to keep on coming!  Today I’m sharing with you a classic family recipe: Lucky Bread.  Why do we call it Lucky Bread?  Who the hell knows.  I’m pretty confident that this came from a PTA cookbook from the sixties, and I think that my Nana said that one of the teachers was married to a man named Lucky.  So I think this used to be “Lucky’s Bread” and we dropped the possessive.

Regardless of what this is named, it’s an easy recipe that people seem to think must have taken more work than it does.  A loaf of French bread is sliced about 3/4 through, sauteed onions are placed between the slices, and then provolone cheese finishes it off.  Twenty minutes in the oven gives you a very gooey-yet-crusty result!

Now, the original Lucky Bread recipe calls for bacon in with the cheese at each slice.  As I’ve mentioned a ridiculous number of times on here, I’m a vegetarian (and allergic to pork) so that’s not happening.  I’ve made this a million times without the bacon and honestly no one has ever complained.  Today I decided to try to replace the smoky flavor of the bacon by adding smoked paprika from Penzey’s Spices.  This was a solid change, guys.  I can’t promise that this will work with just any smoked paprika though, because the Penzey’s smoked paprika is SOOOOOOOO much better than grocery store smoked paprika.  It actually tastes like something!

Serve this with a bowl of soup and you have a great cold-weather meal!  Now, is that what I did here?  Unfortunately not.  I made this around noon on a snow day and snacked on it all afternoon.  Eventually I had to wrap it up and give it to my father so I wouldn’t eat an entire loaf of cheesy French bread.

Preheat oven to 350° F.  In a medium saute the onions and paprika in the butter.  Remove from heat when the onions are translucent. 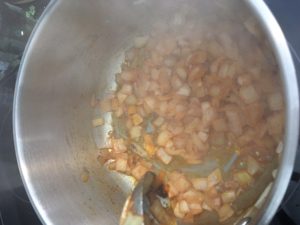 Slice your French bread, making sure not to slice all the way through. 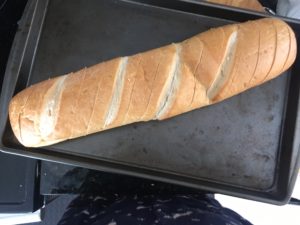 Spoon your sauteed onions into each cut.  Add a slice of provolone.  You’ll see here that I folded the provolone down so that most of it stayed inside the slices.  If you want a cheesy, crunchy top then let the slices stick all the way up. 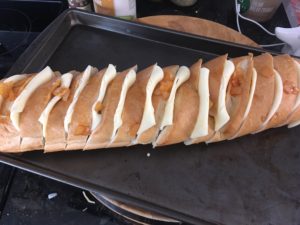 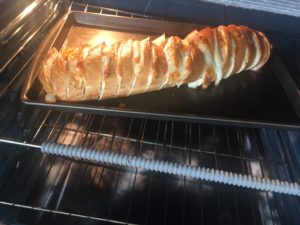 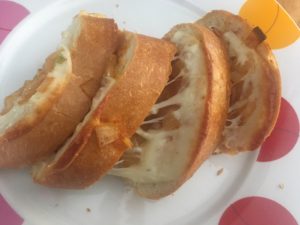 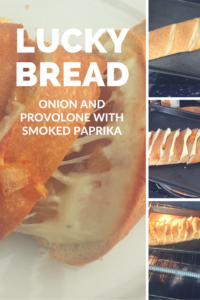