I’m sure I’ve already established that my mother is a crazy person here.  But I feel like I need to elaborate.  Whenever the word Nutella comes up, she just goes “Ew.  I hate Nutella.”  BITCH HAS NEVER TRIED NUTELLA!!!!  She just decided that she hates it and I have no idea why.  I get that she isn’t a huge chocolate fan (neither am I) but her hatred of Nutella is just too much.  You’d think I brought up eating fried earthworms or something.  So when I mentioned to her that I wanted to try out this recipe she exclaimed “Ew.  I hate Nutella!”  So I didn’t save her any!

I don’t remember who I saw had pinned this pin on Pinterest, but I thank her.  Or maybe it was one of the new “picked for you” pins.  When they first started those, I was pretty resistant to the things.  But damn if they don’t do a good job picking some of those pins!  (I will say, I have no idea why they thought I – a vegetarian of 33 years who isn’t interested in disgusting retro recipes – would like a recipe called Old Fashioned Creamed Ham Salad.)

Anyway, these blondies turned out pretty bad the first time.  They looked good baking but then they collapsed into this weird sticky (but still delicious) goo.  I decided that the problem was my liberal use of Baker’s Joy when greasing the pan.  I had also used a thick stoneware pan instead of a thin metal one.  So the second time I made them I used a thin metal pan and parchment paper.  They turned out great!  The only change I made from the original recipe was skipping the Nutella swirled into the batter.  It just seemed like overkill.

I’d definitely make this recipe again, so I’m giving the original blog, The Food Charlatan, a thumbs up!

Preheat oven to 350 F.  Freeze dollops of Nutella on some wax paper. 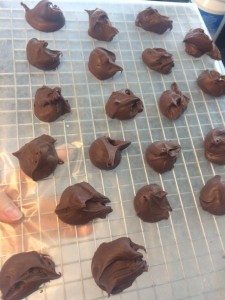 Next, brown your butter.  Place it in a saucepan over medium heat.  Melt it and then let it keep cooking.  It’s done when the foam starts to turn a golden color.  Or basically the second you smell it. 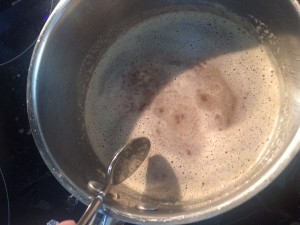 Add the butter to your mixing bowl.  Add the brown sugar and cream cheese.  Cream together. 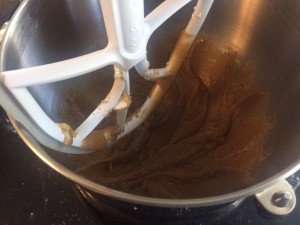 Add the vanilla and eggs. 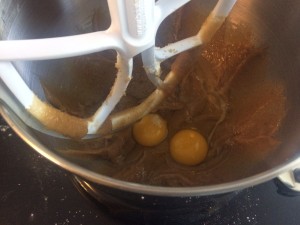 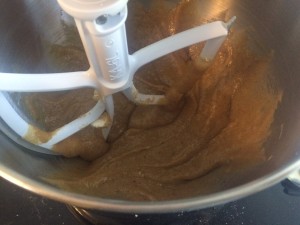 Now add the dry ingredients.  Mix.  Spread the batter into your brownie pan. You’re going to want to lick this beater.  This batter is one of the best things I’ve ever tasted.  For reals.  Remove the Nutella dollops from the freezer and press them into your batter. 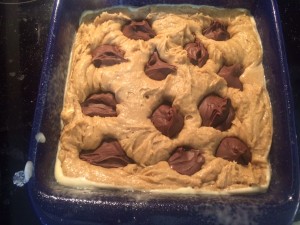 Smooth the batter over the Nutella. 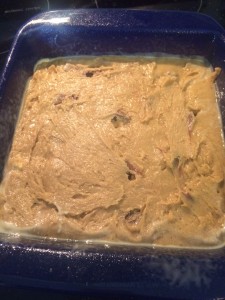 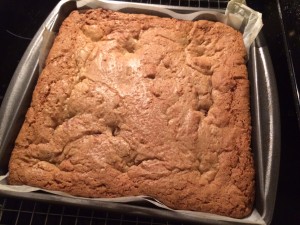 Let cool completely before you cut these.  Otherwise the Nutella will just spill out. 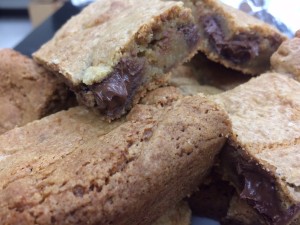 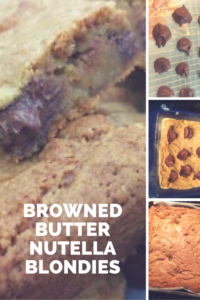