My parents run a construction company and one of the things that make the company truly a family is that Mom cooks big meals for the workers when we have something to celebrate.  And it doesn’t have to be a big holiday for Mom to feel like celebrating.  For instance, this past week was really snowy so Mom wanted to celebrate the fact that they all showed up to work!

I was having a lazy Sunday afternoon so I volunteered to do the cooking this time.  The boys like big meaty sandwiches so I decided to make some chicken barbecue in the Crock Pot.  Now, if I had been thinking when I was at the grocery store I definitely would have bought boneless, skinless chicken thighs.  Then the whole recipe would have been cooked in the Crock Pot.  But alas.  I’m a fool and bought bone-in thighs.  Now, those can be cooked in the Crock Pot too, but I figured then I’d end up with a lot of excess fat in there.  Plus, I’d have just as much of a mess on my hands as if I hadn’t used the Crock Pot.  So anyway, this is a half-Crock Pot recipe.

Before I get to the recipe, I want to praise the awesomeness that is the Cuisinart Multi-Cooker.  I love this thing to pieces.  When I bought my first Crock Pot recipe book (about two decades ago), I remember being really disappointed in how many recipes called for browning ingredients on the stovetop before adding them to the Crock Pot.  I thought the purpose of the Crock Pot was to have one pot!  They were trying to get me with the okie doke!  Anyway, the Cuisinart Multi-Cooker is fantastic because you can do your sauteing/browning in the same pot before switching over to slow cook.  Glorious. 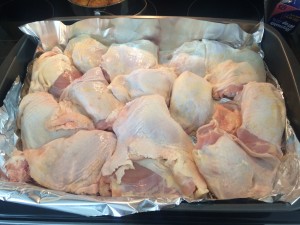 Roast in the oven for 45 minutes.  Remove from oven and let cool until you’re comfortable touching the meat. 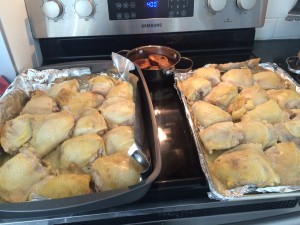 While the thighs cool, saute the onion and pepper in olive oil.  If you have the aforementioned Multi-cooker, then you can do this in said cooker.  Otherwise do this on the stove.  If you’re going to do the whole recipe on the stove then do this in a large pot. 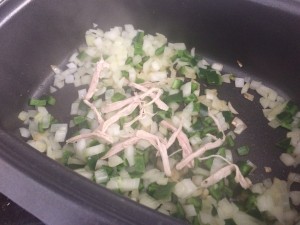 Next, shred the cooled meat.  This is the most labor-intensive part of the recipe, so prepare yourself!  Once you have all your shredded meat in the pot, stir in your barbecue sauce.  Cook on low for two hours, just to let the flavors marry. 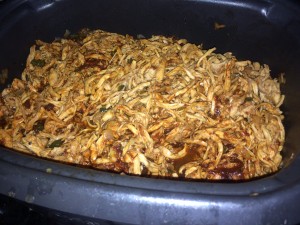 Not the most appetizing picture in the world, but I forgot to take a picture of a sandwich before everyone ate all the chicken!