With a foot of snow on the ground outside, it’s hard to believe that it’s time to start thinking about the garden.  But it is!  I’m certainly excited.  Like every year, I’m giving seed-starting a shot.  Until recently, I’ve always wondered why I’ve had such bad luck starting my seeds indoors.  I remember starting them in the same little Jiffy trays as a kid and always getting them to work.  But finally it dawned on me: I keep my house too damn cold!  My thermostat is set to 60 all winter so the seeds were never in the correct temperature range of 70-80 F for proper germination.  I contemplated turning up the heat, but honestly that sounded terribly unpleasant to me.  I’m miserable at temperatures above 70!  So I ordered these seed-starting mats that heat the trays up.  I probably spent about as much on the mats as I would on the electricity to heat the house to 70, but now I don’t have to live with a hot house. 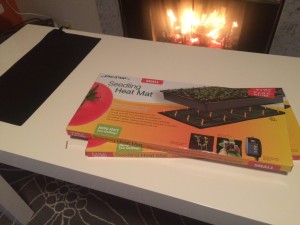 So anyway, I set these out on my desk. 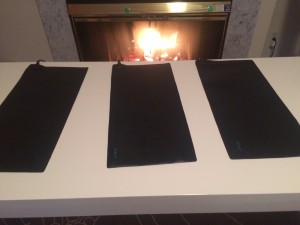 Then I placed the seedling trays on the mats.  I know that a more serious gardener would shudder to think I wasted any money buying these pre-formed peat disk things, but I’m a casual gardener.  If it’s hard, I’m not interested in doing it! 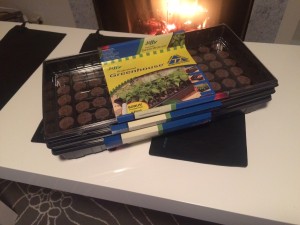 So I put the trays on the mats and then added water over the next few hours.  You want to add enough water that the pellets fully expand, but not so much water that you make the whole tray water-logged.  The seeds will rot if they end up too wet. 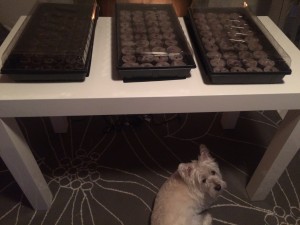 Once that was done, I planted my seeds!  This year I’m trying a bunch of new varieties of vegetables I already grow.  So some different squashes, peas, peppers, etc.  Once transplants for the usual varieties are available at Lowe’s I’ll be planting all of these outside (with protection from frost).