This was one hell of a weekend.  Friday night I went with some friends to see Foreigner.  If you get a chance to see them, you should definitely go.  Tickets were only $20 and you get to see freaking Foreigner!  Man alive, I love Foreigner.

Anyway, while I was at the concert I got a call from my bee seller informing me that I could pick up my nucs the next morning.  And would I mind picking up two nucs for a veterinarian in my area who couldn’t drive to Blacksburg because he was on call.  Of course I said yes so it looked like my Saturday was planned for me.

For those of you who don’t know, there are two main ways to buy bees.  The first is what’s called a package.  When you buy a package of bees, you are buying a (typically) three-pound box of bees.  They are packaged in a box made of wood and window screening and the queen is in a smaller cage within that package.  This is definitely the most cost-effective way to buy bees but I don’t recommend it.  Especially if you’re new to beekeeping.  There are a couple of reasons why a package is less desirable than the other option.  First, installation of a package is pretty traumatic.  Because you know how you get the bees out of that box?  You shake them out of that damn box.  That would be bad enough if the entire top came off the box, but no.  They couldn’t possibly make the packages like that.  That would be too easy!  So instead of the top coming off, there’s a hole in the middle of the top.  When you shake the bees out, some of them get stuck on the sides of the top.  And you have to get those bees out.  So in order to get them off the inside of the top, do you know what you do?  You slam the freaking box on the ground to knock them off!  If you’ve never had any dealings with bees before, that is terrifying as hell.  My package installation didn’t go terribly smoothly last year, so I knew I’d never be ordering a package again.

The second reason I don’t recommend a package is that the bees are just bees.  You’re throwing them into an empty box with no honeycomb built.  No honey.  No brood.  Even if the queen is great (which appeared to be the case with my package last year), the bees are unhappy.  When bees are unhappy with their queen, they try to make a new queen.  And that costs your bees even more time.

The second way to get bees is to buy a nucleus hive, or nuc.  In a nuc, you’re buying not only the bees but the frames that the bees live on.  Those frames have already drawn out comb but also honey and brood.  So when you transfer these frames to your hive, the bees aren’t stuck in a fresh new box that doesn’t smell right to them.  They’re happier bees and less likely to kick out their queen.  There are a couple other advantages to the nuc.  First, the installation of a nuc is calm and non-violent.  All you have to do is slowly transfer the frames out of the nuc and into your hive.  It’s peaceful.  I normally wouldn’t even bother smoking them for this.  Second, you have all that brood!  This means that your nuc has a head start in building up its numbers relative to the package hive.

So anyway, I had my lovely Saturday all planned out for me.  I would drive to Blacksburg (about four hours away), drive back home, and install my nice, peaceful nucs that afternoon.  I was buying these bees from a Craigslist seller and my Dad was concerned about safety, so he decided to come with me.  I was pretty happy about that.  His company has a spare sedan which meant we could drive the bees back in a car with an actual trunk!  In the past I’ve brought both my package and my nuc home in my SUV, which meant the couple of stray bees that tagged along with my bees were flying around inside the car.  With a real trunk, I didn’t have to worry about those guys!  I was also happy that Dad was going because he hadn’t been to the Natural Bridge Safari Park.  It’s a drive-through zoo and I knew he’d like it!

So we picked up my two nucs and the veterinarian’s two nucs and got on our way to the safari park.  It was a lovely time.  When we first entered the park, this fellow did not want to let us in. 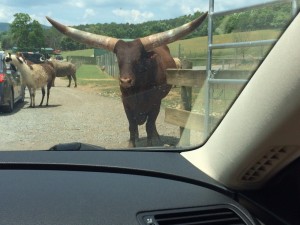 We got to feed a lot of different animals.  Llamas! 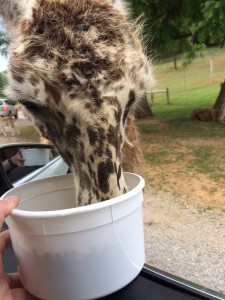 I’ve never seen a speckled llama like this one before! 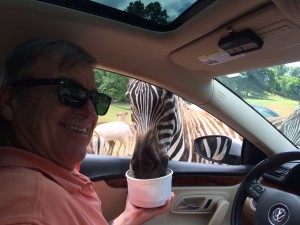 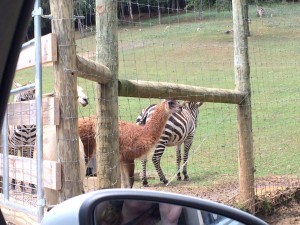 Word to the wise: zebras are pretty darn pushy!  And after we left I realized that it was against the rules to feed them, so if you do go to the park don’t feed the zebras! 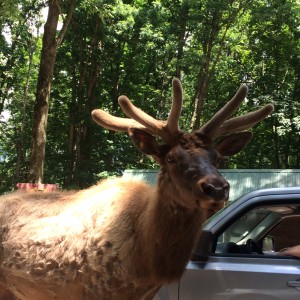 When we were done with the zoo, we figured we should take a bathroom break.  When you’re traveling with bees in your trunk, it’s really important that you don’t let them suffocate.  The bees were in boxes sealed with window screening, so we popped the trunk open to let them get some air while we ran in to the bathrooms.  And there were bees everywhere!  I really wish I’d had the presence of mind to take a picture guys, because it was horrible.  One of the nucs had fallen over (I guess when we hit a bump in the zoo).  I immediately closed the trunk and we abandoned our plans to go to the bathroom.  Time to hit the road so that we could get home to deal with this mess!

I was really glad that we had taken that car instead of my SUV!  I couldn’t imagine how I’d deal if all of those bees were in the cabin with us!

And then all of those bees were in the cabin with us.

You see, it turns out that this particular Volkswagen model has one of those back seats that folds down so that you can get into the trunk from inside the car.  I’m sure that’s wonderful and convenient when you need it, but it also means that the trunk is not bee-tight. 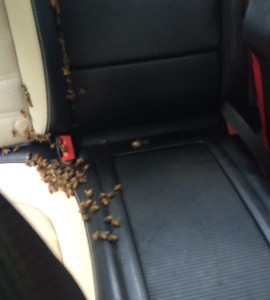 The bees were getting in through a tiny crack in that seat!  I wish I had taken pictures of the rear window.  It was just full of bees!  For some reason, the bees were leaving Dad alone but they kept hitting my head.  I ended up ducked down for about an hour and a half, trying to keep my head out of their flight path!  Dad was strong the whole time.  I don’t know how he did it.  But he’s a pretty courageous guy in general.  Halfway home, I needed to stop and go to the bathroom.  I had Dad park as far away from the door as possible so that our bee problem wouldn’t freak anyone out.  The bee suits were in the back seat, but they were covered with bees!  Dad grabbed them while I was in the bathroom and put them far from the car so that the bees would fly off.  When I got back to the car, we suited up.  Neither of us had been smart enough to bring real shoes, so we were suited up with flip flops on.  I was never so glad that my suit was too long!  I tucked my feet into the legs of the suit and zipped the whole thing up.  Dad wore his suit but didn’t put on the veil or gloves.  Because he’s a badass. 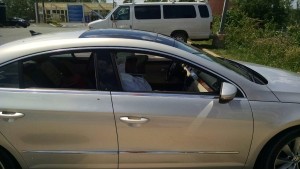 You can’t tell from this picture, but I’m smiling for the camera!

From then on the ride was fine.  With a veil on I’m pretty comfortable with the bees.  I was hoping that the veterinarian would show up late to pick up his bees, but unfortunately he pulled up just as we did.  I wanted to get our bees settled and figure out what the problem was before he had to deal with anything.  But alas, that wasn’t possible.  I ran in to get my shoes and apparently Dad went in to pick up the first nuc without putting on gloves.  When I came out he said “well, now I know what a sting feels like.”  Again, he’s kind of a badass.  When I get stung I run away and cuss a lot.

It turned out the problem was one of our nucs, so I didn’t feel too bad about the veterinarian.  I did feel bad though that he came pretty unprepared.  He’d never kept bees before so his first real experience with them was pulling up to a car just exploding with the suckers.  My neighbors were driving by really slowly, trying to figure out what the hell was going on.  I really hope I don’t get a letter from the neighborhood association!  (Bees are not forbidden, but I can see those jerks trying to pretend they are)  We unloaded his nucs and put them in his van.  He did have a sheet to throw over the boxes, so I hope he made it home sting-free.  Instead of installing the nucs that day, I put them in the shade in my backyard.  They’d been through enough for one day!

We left the car windows and trunk open to let all the bees fly out and back to their queen.  Unfortunately a couple hundred of them had decided that one of the hinges of the trunk was their new home.  I guess the queen’s pheromones had gotten into the trunk so they still smelled her there.  Dad sprayed some Off in the trunk and they left the car alone.  Off doesn’t really hurt the bees, so I didn’t feel bad about that.

I went about my day doing some gardening work.  I haven’t been posting much lately because I’ve been gardening so much!  In previous years I’ve always been good about taking care of my fruits and vegetables, but I’ve had little interest in other yard stuff.  But once I got bees last year I started caring about flowers.  Plus, I’d always wanted to replace my tired-looking juniper with a lavender hedge.  And this was the year for it!

Anyway, I was watering my lavender Saturday afternoon and I got stung.  I’ve never been stung just walking around!  A minute earlier I noticed a bee crawling on my dress but I just ignored it.  I think I put my arm down on top of that same bee and gave her no choice but to sting me! 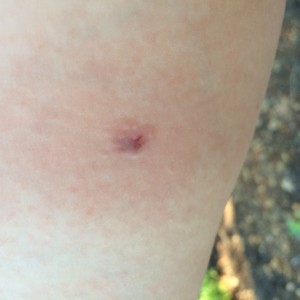 Of all my bee sting locations, my flabby upper arm was definitely the most painful.  It just felt like waves and waves of fire!

So Sunday morning it was time to install the bees.  I normally wouldn’t smoke them when transferring a nuc, but these bees were already kind of upset with me so I didn’t want to risk them being aggressive.  This was pretty quick and easy process.  I just took the frames out of the nuc and put them into my hive. 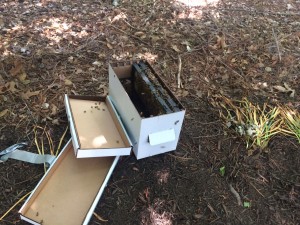 And that was it!  Installing a nuc really is so much simpler than installing a package. 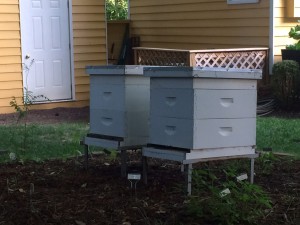