Like every basic bitch on the east coast, I’m super excited for the fall.  Sweater weather, fire pits, and of course, the return of comfort food.  Because who’s really eating butternut squash or Brussels sprouts in the middle of summer?  Well, maybe I still do that but not with the same gusto as I do in cooler weather!

I had a ridiculously long day yesterday: in the lab from 6 AM to 7:45 PM.  I needed something quick and easy for dinner but I also needed something satisfying.  My mother had surprised me with a bag of Brussels sprouts a few days prior, so that sounded about right.  I’m always seeing maple-glazed Brussels sprouts on menus or in the deli case, but I’ve never tried them since I hate maple syrup.  So I went ahead and made up a recipe using another syrup: ginger.  Ginger syrup is one of the best tastes on earth; it’s probably good on everything, right?  Well, this time at least it was amazing.  We’ll see if I end up combining it with something disgusting ever.  (I bet it would be pretty disgusting on eggs, wouldn’t it?)

Anyway, the tricky part of this recipe is finding ginger syrup.  I found it at World Market, but World Market is on the other side of town from me.  So I’m linking to Amazon.  It’s the exact same brand of ginger syrup so I can definitely vouch for it!

Before you try out this recipe, you need to decide how you like your Brussels sprouts.  Do you like them creamy on the inside and browned on the outside?  Or toasted up but still with some bite to them?  Because I definitely like mine cooked to the point of creaminess.  If you don’t like them like that, then skip the first step!

Preheat oven to 425F.  Steam your Brussels sprouts.  If you’re smart, cut them in half before you steam them.  I am not smart. 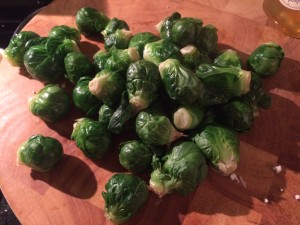 Spread the sprout halves on a baking sheet.  Drizzle with olive oil and salt. 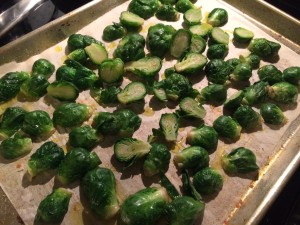 Place the tray in the oven.  While the Brussels sprouts roast, toast the pecans in the butter.  You could do this in the oven, but 425F is a little hot for toasting nuts.  Instead, I toasted mine on the stovetop for a few minutes on medium heat. 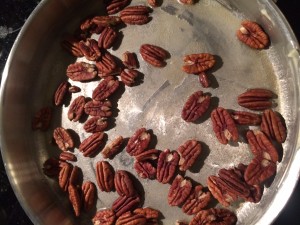 Take those sprouts out of the oven when they’re getting nicely browned. 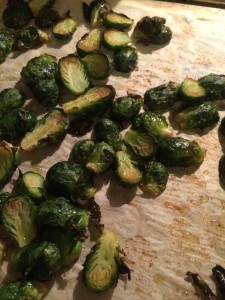 Toss the Brussels sprouts with the pecans.  Drizzle in the ginger syrup. 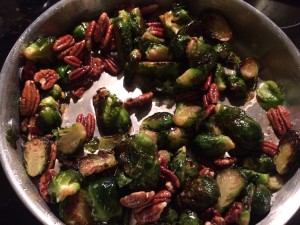 And then have yourself a delicious dinner! 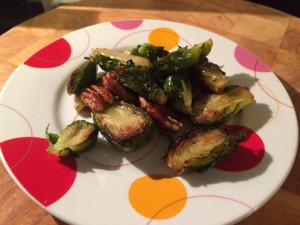 These were great fresh but they were also fantastic leftovers.  Tasty both hot and cold! 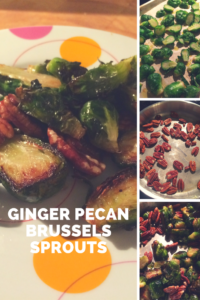