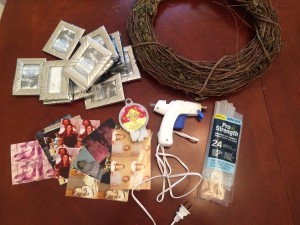 My aunt Sheila has Alzheimer’s disease and it has been very hard on my family.  I could certainly write about that for a while, but I don’t mean for this blog to ever be a giant bummer.  That said, here’s a link to donate to Alzheimer’s research.  This disease doesn’t necessarily look like your great aunt who can’t remember if you’re John’s daughter or Doug’s daughter.  It can look like a woman in her early sixties who can’t walk or talk.  Or swallow a glass of water.

Anyway, since I can’t take time off work to go down to Florida to be with my family I wanted to send something to show I’m thinking about them.  My cousin Julie has been asking that people post pictures of Aunt Sheila online, so I downloaded some of my favorites to make a photo wreath.  After downloading the photos, I cropped them to center on Aunt Sheila as much as possible.  Then I sent them to Walgreens to get wallet-sized prints made.  When you do this, you end up with four copies of each print.  That’s kind of wasteful if you don’t need the other prints, but I 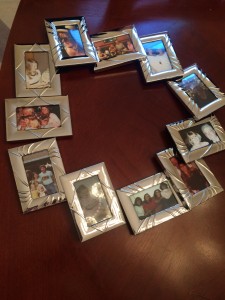 plan to make another one of these wreaths for my cousin Jacob.  And I’m sure my mother would like the extra pictures of her sister.  Next I needed to find lots of small frames.  I was pretty surprised by how expensive tiny frames were at Michael’s.  I mean, $4 isn’t crazy but it’s a lot when you think you’ll be using as many as 25 frames!  I ended up finding some at the Dollar Tree.  Perfect.  The only other supplies were a grapevine wreath ($5 at Hobby Lobby), floral wire, and a hot glue gun.

Now that I had all my materials assembled, I got to work.  First things first, I cut out the pictures.  Then I taped them into the frames so that they wouldn’t shift around and expose the backing.  Next, I played with them to find an ideal arrangement on the wreath.  I’ve seen some tutorials online for similar wreaths that said to take the little easel thing off the back of the frames.  I started out doing that, but I quickly realized that was both unnecessary and counterproductive.  If you take the easel off the back, you need to hot glue the floral wire to the back of each frame.  That’s an extra step!  Why do an extra step if you don’t need to?  So I just wrapped the wire around the hinge.  Then I wired the frames onto the wreath.  If you’re making this for yourself and don’t want to deal with the glue gun, you’re done.  But I wanted the frames to stay still on the wreath and not move around during shipping.  This is where I finally whipped out the glue gun.  I

went around the wreath and glued the frames to each other so that this would be a more sturdy wreath.

And that’s it!  For the first time ever I am going to pay the UPS store to package an item.  I just don’t have the time or energy to run around looking for a correctly-sized box for this.  And I’d hate for it to break on the way there and then give my cousin one more thing to deal with. 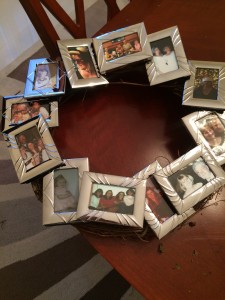 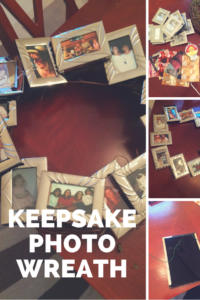