I have a confession to make: even though this is a blog that includes housekeeping advice, I have recently hired a house cleaner.  I feel like Ali Landry’s character in Legally Blonde: a celebrity fitness instructor who gets liposuction.  But here’s the deal with why I hired the cleaning lady: finishing a PhD is hard!  (Maybe not so much hard as stressful.  I spent WAAAAAAY more time stressing out about writing my dissertation than I did actually writing it)  So for the last semester of my doctorate I allowed myself this indulgence.  And then when I graduated I planned to stop.  But the lady is so very nice and when I reminded her that it was just for the one semester, she got upset and thought I was saying she didn’t do a good job!  I couldn’t handle it!

If I was going to live here long-term, I’d have to suck it up and explain everything to her.  But as it is, I’m leaving soon so I’m just continuing to use her services to avoid confrontation.  I know, I’m such a badass.

Anyway, last week I left my cast iron skillet on the stove AND SHE WASHED IT!  This is the cardinal sin of cast iron care!  Luckily I noticed within a few hours, so I was able to catch the pan while it was just a little bit rusted. 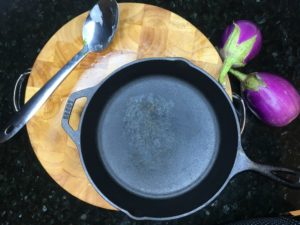 See?  It’s not that bad, but the damage was done.  The seasoning was gone and the rust was definitely starting.  So I figured I’d share with you how to restore rusty cast iron.  First, you need to sand down the rust.  You can do this with steel wool but I didn’t have any so I used sandpaper. 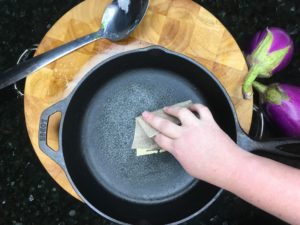 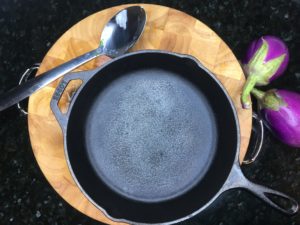 You’re going to wash the skillet with soap and water.

I know, I know.  This is what got you into this mess to begin with!  Well, you need to remove all the rust before we can move on.  So you’re going to wash the pan with soap and water and then VERY THOROUGHLY dry the thing.  You need to dry it and then go get a fresh dish towel to dry it a second time, just in case. 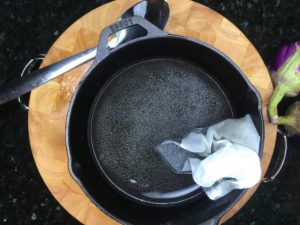 Okay, now that you have a nice, clean pan you need to season it.  This is a really easy thing to do.  You’re going to rub the pan all over with lots of vegetable oil, making sure not to ignore the outside or handle.  Now you just have to bake it upside-down at 350° F for an hour or two.  Because excess grease could drip off, I put a cookie sheet on a lower rack to catch anything that fell.  Nothing did, but it’s better to be safe. 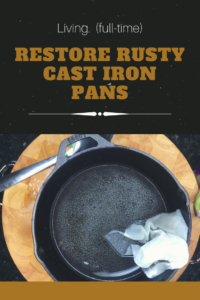 Since I’m in confession mode: about a decade ago I told my neighbor Henry that I’d bring in a package for him while he was out of town.  I walked in and saw that the kitchen was a little dirty, so I decided to tidy up a little for him (we were close enough friends that this isn’t weird).  Guys, I washed his damn cast iron skillet.  What an idiot I was!  But you know what, Henry was cool about it.