DIY July is still going on, but I forgot to take pictures!  In my defense, it’s really hard to take pictures while installing a ceiling fan.  And I’m pretty confident that no one needs a tutorial on how to paint a wall.  Or trim.  My goodness, so much damn trim!!!

Anyway, I’m slowly getting to where I can say “done” and put the house on the market.  I need to figure out how I’m going to dress my dining room window.  The house came with white sheers and black drapes, which were fine.  When I took them down to paint though, I realized that 1) the curtains were making the room look smaller and 2) curtains just mask the shape of the window!  If it was just a big rectangle that wouldn’t matter, but this is a big rectangle with an arched window over the middle part of it.  (I think I’ll remember to take a picture of it for next week’s post)

So I’m thinking I don’t want to put the curtains back up.  I definitely need to put something up though, as that window has a simply spectacular view. . . . . . .  of the neighbor’s trash cans.  I really wanted to add honeycomb shades inside the window’s frame, but I don’t have a lot of depth there.  I’ll figure something out, I’m sure.

In between all the time I’ve spent thinking about what to do with that window, I’ve still needed to feed myself.  I posted the recipe for my olive and rosemary quickbread on Facebook last week so I was craving that flavor combination.  And y’all know I love a good grilled cheese!  (See evidence)  I happened to have a loaf of rosemary bread in the house, so it was time to fry up a new favorite!

Guys, do I really need to tell you how to make a grilled cheese sandwich?  Because I sure as hell didn’t take pictures before I finished this sandwich!

Geez.  I’m embarrassed for all of us that I had to type that. 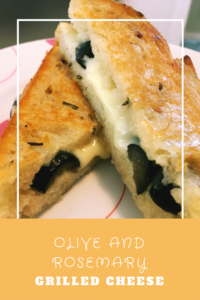