I have a confession to make: I am a Southern woman who as never tried creamed corn.

Whew!  I’m glad I had a forum for this terrible confession.  Anyway, creamed corn was just not something we had around my house growing up.  I’ve seen cans of creamed corn at the grocery store but never picked one up.  Anyway, I was at the grocery store with my mother the other day and we argued for a bit about whether corn has any use once it’s off the cob or not.  I, being a corn purist, have hated all corn dishes except plain old corn on the cob.  Mother Dearest likes corn thrown into all kinds of things: salsa, vegetable soup, pasta dishes.  Frankly, when corn touches another food I consider that food a plate of garbage.  So while we were arguing in the middle of the produce section about whether I should buy corn or not, Mom suggested I try creamed corn.  So I did, and I have to tell you it was pretty darn good!

Saute the onion in the butter over medium heat.  Once the onion begins to soften, add the corn and stir for two to three minutes. 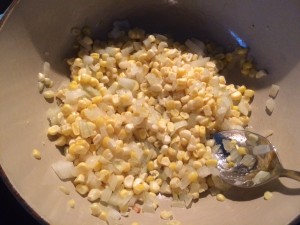 Reduce heat and add the half and half.  Let simmer five minutes. 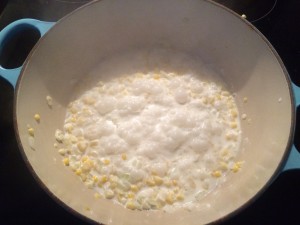 Meanwhile, whisk the milk into the flour.  Stir the resulting milk paste into your corn.  Let the mixture come to a boil and continue boiling for one minute, stirring the entire time. 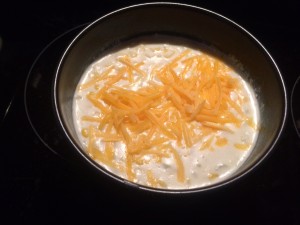